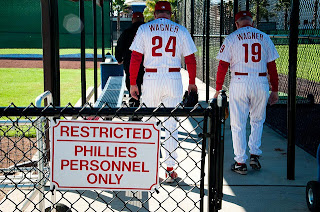 Phantasy camp for 2012 came to a close without me last Sunday. It has now been 5 years since I had the pleasure of attending. I got to go in 2007. After years of listening to The Wriz and cdubsallstar12 claim this is the year we are going to Phantasy camp, I pulled the trigger. I smacked my credit card for $3,800, (It's over $5,000 now) and hoped for the best. It's funny, you have great expectations about what it will be like.
Let me tell you Bunters, it's everything you would expect and more. First, you get to meet Larry Andersen a few months before at the 'Initiation Night' at . There, you get fitted for your official Phillies uniform and are informed about what to expect. This is all held in the Phillies locker room. I got fitted in Pat Burrell's locker, it was 2007, remember? Getting back to LA. He is the commissioner of the camp. If you think he's funny on the radio you wouldn't believe the sh!t he says when he is uncensored. We also got information about a pre camp workout. That is were I met two guys who I still consider friends, Sean and Teddy Ballgame. We continued our pre camp workouts on pretty much a weekly basis right up to camp. A word of advice, the Phillies camp staff lay out a very good stretching program to follow before camp. Follow it! I thought I didn't need it since I was 38 and was playing roller hockey at the time. It isn't for the old timers, they know their limitations. I pulled my hamstring the first day. If it wasn't for the amazing training staff, the same staff the real Phillies use, I would have had to have been a bench jockey all week. The only good thing about getting hurt is I got a nickname early on, but more on that later. 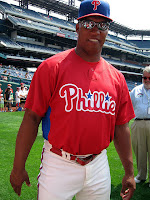 So I hopped on a plane to not knowing fully what to expect. I was lucky enough to be on the same flight as Milt Thompson. We sat just a few seats away. Milt saw my Phillies gear and asked if I was going to Phantasy Camp? I told him I was. He chatted me up for awhile and assured me I'm in for a great time. That was one thing I wasn't sure of, how approachable will the 'Legends' be? My experience is they all want to be there. They all will give you more then just a handshake, autograph and a smile. They will actively engage you in conversation. Tell you the real scoop about anything you ask. They could not have been nicer. The first night they have a meet and greet, the campers were still not sure how the players would be. Jim Eisenrich comes up to the table I was sitting at and asked if he could join us. Jim went on to answer any questions we had, tell stories, you name it. I was also lucky to be drafted by Mickey Morandini and Dickey Knowles. Two super cool guys. Mickey is old school baseball, real down to earth, funny. Dickie Knowles is the most positive person I have ever met. He battled his demons while he was playing. Now you can't talk to the guy for 5 minutes and not feel inspired.
If you read this blog, you are probably the biggest Phillies fan out of everyone you know. Every camper at Phantasy camp is just as nuts about the Phillies as you are. You will instantly click with your teammates and everyone there. ESF is the company that runs the camp. They do a first class job. Your every need is totally take care of. Your week starts with skills evaluation. Each team has two Legends coaches. The Legends draft their team from the pool of campers. The teams are pretty close in skill level. If you are like me, played baseball until High School and are marginally athletic you will be slightly above average. I got a hit off the guy that won the Cy Young award for campers so no one is going to blow you away when you are at the plate. My team finished around .500. We did win a game that we trailed 10-0, final score 11-10. That was damn exciting. We also won a game 4-3 with a pitcher that was in his early 70's, Dave Scott. Dave  was our old timer. He pitched batting practice to the A's back in the 50's. The old guy was amazing. He kept the other team off balance all game. By the 5th inning, we were diving for balls like he was throwing a no hitter. He deservedly won the Tug McGraw award for most inspirational camper. 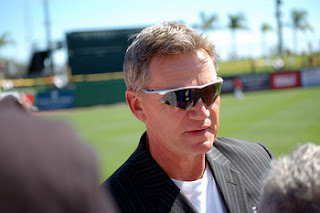 Back to my nickname, my one highlight came when I was in rightfield. There was a man on first with 2 outs. A base hit and three hops to me. I charged the ball and came up firing to 3rd. The runner on 1st was trying to go 1st to 3rd. I made the best throw of my life, (at speed pitch I top out in the low 60's). A one-hop laser right on the bag. Bobby Abreu style. The runner was out by 10 feet. Remember, it wasn't JRoll running. I came to the dugout and Dickie Knowles slaps me on the back and says, "Great throw, Hammy!" Nothing like it. My week could have ended there and I would have left a happy camper.

They save the best for last. Your team plays a 3 inning game against the Legends team. My one official at bat verse the Legends went in the score book as FC 6-4. I reached base at least. I played 1st base during the game. I got to do the 1st baseman chit chat with Juan Samuel, Von Hayes and Ricky Jordan. My buddy, Sean, stroked a clean double off of Dickie Knowles, that was the only extra base hit I saw a camper hit. Milt Thompson and Ricky Jordan both went yard. You realize from the sound of the ball coming off their bats that the Legends are playing at a level you could never achieve.

If you have an extra 5 dimes laying around, I highly recommend Phillies Phantasy Camp. You won't be disappointed.

Posted by Jay Wrizight at 12:19 PM No comments:

View from the Left Coast by a Lefty: Ramblings and Happy New Year

View from the Left Coast by a Lefty:  Ramblings and Happy New Year

CJ Hood kicked the holidays with a great post. Got me thinking about a lot of shit Philly oriented. Some good, some not so good. But that's what's so great about being Bunted, cuz nobody knows what's good or bad really. So this is basically the ramblings of the old fat bastid out in AZ, who wishes(especially today through Monday) that he was back home in Philly (well, Cherry Hill... the best part of Philly) this holiday season. Just to be clear, I say Merry Christmas and NOT Happy Holidays. Now that that's out of the way...
Dealing with Christmas and the winter meetings, did this year suck or what? The Miami Gay Boys made big cash ripples and Ozzie ran his mouth. Big whoop, maybe + 5 games in the win column. ATL did zippo, ditto the Mutts. The Nationals seem to try to be copying RAJ in large and small deals but were not standing still. I think our bench is better now than at any time last year. I sometimes lose sleep wondering if Howard will ever be the same again. I'm sure his Achilles will heal, but will his head? I swear if they let me have him for 2 weeks I could turn him into a .290/.390/.890 hitter that would terrorize the NL. Lest you have doubts check my swing: 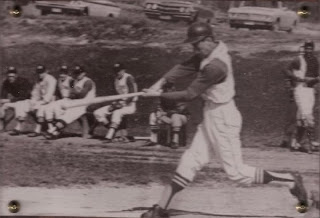 That was taken in April or May 1967 my junior year. I may be old but I'll *NEVER* forget how to hit.
Ok seriously, why hasn't Madson or Fielder signed yet? I think Scot Boras should be shot dead. Next, does Ben Cherington (the new Red Sox GM) think he's Billy Beane by grabbing Bailey at a bargain price? Bobby Valentine ain't gonna do a damn thing. I thought they shot Moneyball already? Why haven't the Spankees done shit yet? Or does anybody even care what happens in the junior circuit? I don't... I'm with Crash... I believe in long, slow, deep, wet kisses that last 3 days. Especially if it's with Nicole Kidman, Charlize Theron, Angie Harmon, or Sasha Gray. Another thing that worries me(since I live out here) is why haven't the Dbacks done squat except sign Jason Kubel who really isn't gonna make a difference? Does Gibby think they're that strong? Is this an indictment of most of MLB? Am I just a paranoid old bastid or a FB fraud? Are these enough questions for New Year's Eve?
Let me say this... the Flyers Alumni Game rocked. BERNIE! BERNIE! So glad Lindros got a standing O. Was it just me or did the Flyers have THAT many more elite players in their history than the Rangers did, in half as long a history? I am SO stoked for the Winter Classic, and my Giroux WC jersey arrived 2 days ago. I'll be front row center at Upper Deck Sports Grill Monday morning with my son. Nothing like a bacon, ham, and cheese omelet before pounding cold Bud Lights to get ready to kick some Ranger ass. Am I forgetting anything? Oh shit... Wriz I am gonna put in for 6/4-6/6 off to try and make that tailgate thing against the Gay Boys. If I get there, the rest of you Bunters have no damn excuse.
Since I am clicking send at 11:47pm 12/31, let me say Happy New Year to all Bunters and their friends.
Bill S aka netfather
P.S. - who the fuck is gonna come out in April to watch the Phils here with me??  ;)
Posted by Jay Wrizight at 12:54 PM No comments: