View From the Left Coast by a Lefty:  Been a Lonnnnnnnnng Season


I've spent a couple of weeks thinking about this, my last piece of the year. I actually started out three different times to write it, and each time drew a blank on the direction it would take. Earlier CJ nailed a good way to end, with awards. Seeing as how that's no longer available, I'd like to accept my Globetrotter trophy by thanking Southwest Airlines for *NOT* cancelling my flight this year after I had to book my vacation seven months in advance and pray the M'n'GIII would fall during my stay. I don't think I'll be making it back home in 2014 so that pressure is lifted. Next year it's time for my family (and anyone else interested) to trek to AZ to see me. So if anyone who reads this decides to brave the desert just PM me on Facebook and I'll do what I can to accomodate. Something to consider: the Phils are in town here April 27-29(Fri-Sun) and our annual Scardefield outing will be that weekend. My kids seems to enjoy me spending $300 on tickets so they can sit around and bullshit and up some pics to Facebook. I usually have to guess who's going to fork up the $11 for a hot dog and beer but I digress. 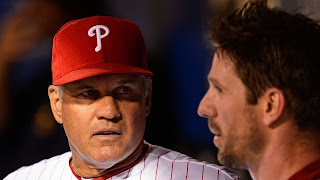 So now, what's left to hash out? I think it's a foregone conclusion that Sandberg will be made the perm manager. To me he's shown signs he has a plan. Now if only RAJ had a plan this coming winter could be productive. If I had my druthers there would be some way for the Phils to rid themself of Howard's contract and Chris Wheeler in one fell swoop. That alone would brighten the horizon and bring hope to a disenchanted franchise and it's fans. But with neither being reality let me offer a few moves to be made. First, re-sign Chooch at a hometown rate. We need him one more year for a lot of reasons. Second, someone needs to review all the video on Kendrick... to note how he went from bum to dependable and now seems to be returning to his former self. That same person can also research Hamels video for mostly the same reasons, but in opposite directions. Cliff Lee has earned his annual trek to Arkansas no problema. But third, this is one that will make me very unpopular... I think we part ways with Doc. His desire and effort are not in question, but I personally think he may just say phuckit because he can't perform to his own standards. He doesn't need to prove to anyone, in Philly or anywhere, what he has accomplished. But I also don't think there's enough left for his pride to let him continue as a major league pitcher on the elite level. I know I couldn't do it when I threw my arm out and lost any hope of a major league career. But I still played another five years, just never pitched again because I could hit as well as anyone. I know, I know, nobody cares but it *IS* my opinion lol. 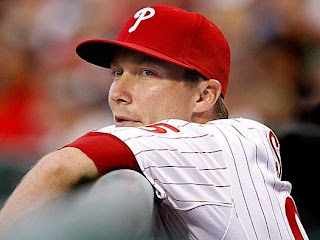 Now for the kids. I'm excited to see Ruf and Asche start next season as major leaguers. I'm excited for the return of Ben Revere. I want to see Dom Brown come back and be as consistent as he was this year. I want to see Bunts CEO The Wriz become excited for another new season and anticipate more contributions from him <ducking>. I think Galvis has to start the year on the roster as well. If we can perfect his relief pitcher technique I can finally let go of Wilson Valdez. I wish Maikel Franco was ready, boy we could use his bat. I hope Tommy Joseph is free of concussion symptoms and they decide where he should play, cuz the boy has talent. Rupp looks like he can be capable but we stick with Chooch and Kratz. I'm definitely planning on following Jesse Biddle as best I can from out here, he's the next order of intrigue.


Ok now, any moves to be made? I think we fire RAJ before he gives away too much for Mike(I refuse to call him Giancarlo) Stanton. I feel much better now about Chase returning than I did 2+ months ago. Rollins we're stuck with, I say move him down to 6th in the lineup. Maybe then he'll wake up when he realizes he's no longer an offensive threat. Once again I offer my services to the Phillies to teach Ryan Howard how to hit. Sitting in FL in his $7MIL mansion he isn't learning shit except how to collect a guaranteed pay check. Now, I wish I had an answer for the bullpen. At least Diekman and Rosenberg have shown some improvement. But it's going to take more work than the Seaside Heights boardwalk and I don't have answers. Sad to say my expectations for next year = 3rd place NL East.


So there you have it sports fans, the ranting and ravings of a crazed old man who resides 2500 miles from CBP. I wish it was better, but in some weird way this piece seems to mirror the Phils season. In, out, lucid, incoherent... we got it all. Once again let me thank all the peeps I met at M'n'GreetIII, it was a blast. Wriz, I know I've done better and hopefully, like the Phillies, it'll show next year. CJ you get Bunter of the Year hands down. As of today, 9/13/13, I turn my attention and hope to Chip's offense and the opening of Flyers training camp. But that's for a different piece. My hat's off to all you Bunters who keep the Phaith. May we continue to exchange views on Facebook. Chow til 2014.

ELECTRIC SEX HAS NOTHING ON DA BUNTERS!!!

Rookie of the Year Award:
Darin Ruf.  Ashe may be hot as of late, but I think Ruf was more solid overall.  He’s got the swing and the power to become a heavy hitter in the league.  I’d love to see Howard get his walking papers and Ruf get the 1B job.

Humanitarian Award:
The Wriz for using his entanglement of a beard to house lost & abandoned kittens. Well deserved.

Don’t Call It A Comeback Award bka Pill Poppin Player of the Year Award:
Tie: Chooch & Galvis. I never understand your post game interviews (and either does Murph), but I do understand solid at-bats.  Unless we could get a key piece in return, I think we should re-sign Chooch.  I think Galvis should start next year, maybe at 3rd, if we trade Asche for lets say Giancarlo ‘don’t call me Mike’ Stanton.

Michael ‘King of Pop’ Jackson Bunter Vanguard Award:
Jimmy Rollins.  Stop swinging at the first pitch bro.  At lease Sandberg had the bells to sit your ass down. 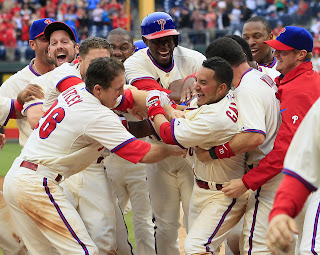 AND YOU THOUGHT I GOT HIGH LAST SEASON!!!

F’ed in the A’ Award:
Sir Charles Manuel.  Your time may have been up, but the organization still didn’t have to treat you like a Canadian coin in a Pepsi machine.

Napoleon Complex Award:
Ruben Amaro Jr.  You straight up clowned this team and as a result on slow decline since ’09.  You doled out cash like it was Monopoly money and we got fat cats like Howard riding the pine.  Manuel is gone and you’re next if you don’t get some bats up in here and mend the bullpen. So do it!!!

Globetrotter Award:
Netfather Bill.  He missed his flight last year (but at least tried), so he tried again this year with much success and attended M&GIII.  Although he was out of uniform he did attend and traveled across the country to be there.

Turn Around Bright Eyes Award:
Ryno Sandberg.  Manuel got pushed out faster than an Octomom baby, but irregardless (not a real word) the Phils have somewhat turned it around in their last 60 games.  Whether this was just one of those baseball trends or not we’ll never know, but my vote is to retain him for 2014.
Side note:  I hope the organization holds a Charlie Manuel Day so we can properly say goodbye.

Bench Player of the Year Award:
Kevin Frandsen.  My man hits walk-offs, can play any position and has a dirtier helmet than Peter North.  I hope he sticks around for a while. 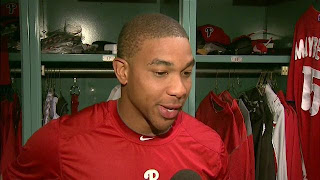 “THANK YOU FOR THIS PRESTIGIOUS AWARD.”

Mad Bro? Award:
Big Pun C. Dude, we appreciate your input…we really do, but why you so mad?  Every time there’s a light hearted LOL post on FB you gotta get all ‘Moody Judy’ on us.  Lighten’ up mang…Howard will be back next year.

Buntamaniac of the Year Award:
Despite the shitty season, our fine little organization blew up in 2013.  And as we welcome all to our family there are a few Buntamaniacs who are always supporting our cause.  So this accolade goes out to a few peeps: Robin, Timmy ‘the leg’, Lori, Sue, Missy, Robert, Joe, Mary and Al.  Thanks for making this season somewhat tolerable.

Phillie of the Year:
D*Brown was a baller for the first half and earned his first all-star game, but it’s not him.  Lee was also an all-star but he didn’t cop bling either.  Cole? You would think, but nope.  Then who could it be you ask???
Ben Revere:  He’s a positive influence on and off the field and was a solid bat up until he got injured in a game that shouldn’t have gone as far as it did.  He’s back now in Clearwater and I think he’ll be a stud for us for years to come.

And there it is kids, if you’re not happy with the results than comment below or on Spacebook.  And if you didn’t get an award, like Pee Wee Herman would say, ‘I meant to do that.’  Have a good off season kids: Say your prayers & eat your vitamins.  Hopefully my last blog next year will be in late October after a Phillies WS win! Catch me Fri; Oct 4th headlining the END OF SUMMER COMEDY TRAIN REK show at Daly’s Irish Pub in Northeast Philly @ 8pm…let’s get ‘bunted!
Posted by Jay Wrizight at 3:49 PM No comments: