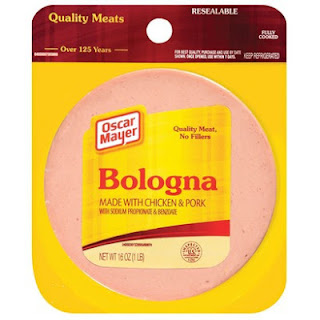 MY CLOSER HAS A FIRST NAME IT’S C-R-Y-B-A-B-Y!
A lot of things have happened since I last blessed you with a Hoodwink’d ep.  On a personal note, former ‘Bunter, DB29 had another baby (he’s 2 shy of having his own reality show). I turned the big 4-0 (now I know how Netfather Bill felt in the 1960’s).  (Also, now that I’m older, I find that I’m using parenthesis a lot more). But more importantly, the Phillies got to .500 and 2nd place in the East…hell, they even were above .500 at one point.  Then they went on a road trip to play the ‘twin towers’ of the MLB (Twins & Brewers) and got schooled.  Next, they came home, almost swept the ‘Gnats & even copped the 2nd place spot again for 24 hours.  Some ‘Buntamaniacs claim this blogger jinx’ed the sweep cuz I made a broom reference on our Facebook page.  Get real…the Phils don’t need my help to blow a game…they got a whole cast of characters to take care of that bro!
We’ve also added another concern to worry about in our closer.  Papelbologna almost blew game 1 of the Gnats series, so he came back in game 3 to have at it again.  And success!  Then the cast of characters which is our bullpen paraded out and Ian Desmond clocked a granny.  At that point it was zzzz’s time cuz it would take this team 6 games to overcome a 4 run deficit.  And the icing on the cake, Papp is now playing the ‘blame game.’  He must know he’s on his way out at the end of July.  Other points of discussion include the derailment of the D*Brown hit parade, Howard’s slight progression at the dish (although he struck out thrice on Wed) but as long as we have Delmon Young to blame all is good (tongue planted firmly in cheek). THIS IS THE RAJ OF BOLOGNAS. #CHEAPANDGROSS
At this point I think we need to clean house starting with RAJ all the way down to Ryan Howard.  This team needs a facelift and I’m not even sure Sandy’s the answer cuz I’m not a fan of his skillz at 3rd base.  He’s sent more men home than Obama.  Neil Young has a better chance scoring at home than Delmon Young does.  It’s time to let go of the past and start anew.  I don’t have all the answers, but we’re downgrading while other teams make moves.  It’s been 5 years since we won it all…that’s 10 in baseball years.  The RAJ theory on ‘pitching wins games’ only works for the Phillies if those pitchers know how to hit.  Otherwise we’ll continue to lose 2-0 or 1-0.  So if you’re not going to clean house at least acquire an ace at the plate.  Bargain hunting at the MLB garage sales isn’t cutting it.

I remember when writing this blog was fun now I’m just trying to find different ways to say the same shit.  There won’t be any new news to report until the organization decides to create some.  Until then stay out of the heat….let’s get ‘bunted!
Posted by Jay Wrizight at 3:58 PM 2 comments: 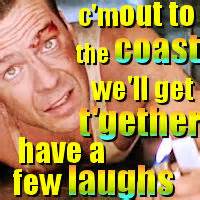 Started to write this Friday, but held off because of circumstances not beneficial to the Phillies. The later it gets this afternoon the worst I get. Thurs night was to me a plateau to be conquered: over .500 finally and look out NL East. Nats behind us and ATL playing like bleh, couldn't ask for much more. Then comes the weekend...

Why is it that since 2008 we can't beat MIL consistently? Why do players like Aoki and Lucroy look like world killers? Why do our outfielders choke like a baby who swallowed a penny when anybody with speed is on base against them? Ok this last sentence I take back. Our outfield sucks, no range and no arms. I have no fix for this now or in the minors. Do I know what it takes? Yes, get rid of Howard's salary and I'll find us a competent outfield.


I had high hopes for the bats. Hitting is contagious and it started to spread until Friday. Between bats dying and Chollie's bizarre lineups I'm losing my anticipation for this season slowly but surely. Try as I might there are no bright spots or silver linings day to day like existed a week ago. Kratz gets hurt, Stutes forgets how to pitch, dead bats(save Brown, who has slowed down a tad), Howard(who won't listen to my advice... his loss) becoming a zero threat,  lack of a leadoff hitter(thanks Chollie) which leads to Revere hitting 2nd, no wonder I sleep like shit at night and smoke more than I used to. For a week that started out so full of promise and blew up like a car driven by John McClane what else could a sane person think? 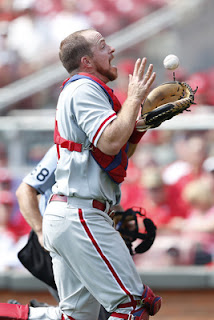 It saddens me to have to write like this, but if you think about it I'm just following performance on the field. There's no longer much room for witty or funny commentary, because I take my baseball seriously. I believe last week was make or break for this season. Won 6 in a row, over .500 and ahead of the Gnats(lmao) and in position to decide their destiny. So we go 0-3 and look like shit doing it and lose players. Momentum gone, having fun during games gone, bullpen rallying like a drowning life guard. The optimists will say there's a lot of season left, but not enough to take charge and be a force. So with heavy heart I'm going to piss off DGirl, Robin, and a few others. It's time to sell starting with Utley, if he can come back to serviceable like the beginning of the season. There'll be plenty of interest in him and he should bring some decent future player(s) that will contribute. The Michael Young experiment started out great, but now he looks like an older veteran that can help certain teams in certain situations. Kratz and Chooch love them, but serviceable pieces to certain teams in the right situations. Since I can't get 2 weeks with Howard to straighten him out get whatever you can for him, even carrying half his salary this year and next. Brown and Mayberry get stays right now. Galvis will be Valdez for the next few years. Doesn't leave much, does it?

Of course everything depends on if/who goes and what we get back. I'm saying get used to the fact that the core of the last 6 seasons aren't what they used to be. I purposely left off pitching because I think with the right replacements we won't be that bad off. I honestly think Halladay is going to prove all naysayers wrong and be a beast again for a couple more years. That man doesn't know how to lose, or go down without a fight. Cliff, Cole, Kendrick, even Pettibone can be formidable. When the Phils clean house on the coaching staff and Sandberg takes over with a new pitching coach, who knows what may happen? Ryno in less than 2 seasons took the Iron Pigs from laughing stock to the top of the league, even with tons of callups. There's no reason to lose it, this is called evolution. Luckily we have the right man in place. If only Chollie will bow out gracefully... but that's another problem for another time.

And lastly #MG3... I had a damn good time. Kudos to Wriz and staff for the choice of sections with covered parking and location. Plenty of beer and food if you knew where to look. Plenty of good company. Was definitely worth the 2500 mile trip, even though it was the secondary reason lol.  ;)  Was great to meet all the Bunters, and tshirts were flying all over. Hopefully I get to do it again next year, even though it's my family's turn to come out west. No matter what next April or May I'll be at Chase Field in my Richie Ashburn throwback jersey rooting for my Phils. Since coming back from Dallas I'm still undefeated in games I attend against the Dbacks. But for anything written above management has the last say. I only wish I could get someone's ear who mattered for 5 minutes.


Let's get Bunted, looking forward to 2015 and the new regime.

Posted by Jay Wrizight at 3:20 PM No comments: 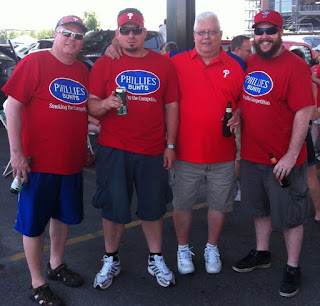 PHILLIES BUNTS BOARD OF TRUSTEES


Once again another Meet & Greet hosted by Phillies Bunts Inc. has come and gone.  And as promised it was bigger & better than ever.  It was nice to see some old faces as well as meet new acquaintances.  Meeting Netfather Bill was cool and seeing the extra Bunts shirts Wriz brought ‘fly off the shelves’ was overwhelming (we are printing more peeps)!  Of course, many road sodas were consumed which is always good and the Phils did come thru with the ‘W.’

However, this blessed event wasn’t all ‘hugs & kisses’ bro.  I should have known something was amiss when the first thing Wriz said to me was ‘hey did you lose weight.’  Then he proceeded to tell me in his best Chris Tucker voice ‘I’m gonna get you high today.’  I got 3 kids bro…I don’t put that stuff in my temple of a body.  Little did I know that he wasn’t trying to get me stoned, but elevate me into the Thermosphere (Google it!).  Watching a game at 50,000 feet is no easy task ie nosebleeds, ducking for air planes and getting kites stuck in your cheesesteaks are only some of the issues me and my NEPA Posse had to endure.  Now, when I was a young lad, my mom used to tell me that if I didn’t have anything nice to say then blog about it.  So, since I am a ‘momma’s boy’ I’m going to do just that:

10.  My boy Nick rolling in with a cooler full of adult beverages and no opener.  Good thing Timmy ‘I’m gonna pop some caps’ G. came thru.
9.  My boy Aaron insisting we didn’t need a GPS on our way down and getting lost 3 times.  Mapquest is the MySpace of navigation kid.
8.  Not enough ‘Bunts shirts to go around.  More people need to get ‘Bunted on a regular.
7.  The makeshift DJ giving us a choice between Billy Joel or Jimmy Buffet.  Don’t get me wrong, I’m Billy Joel down…he’s an honorary Beastie Boy for God’s sake.  But it’s tough getting your ‘game face’ on to Uptown Girl.  How ‘bout some Wu Tang son?
6.  The female photog who took pix of me either with my head cut off or stuffing my face with a fat Pat’s.  Nobody wants to see that!
5.  Sexpanther’s Wilt’s ‘Something or other Lehigh’ Beer.  It tasted like pickle juice bro.  High School kids wouldn’t drink that swill.
4.  I offered everyone in ear shot some of my suds, but no one returned the favor with a burger or even a hoddog.  If my weight falls under 250 ish could get hectic real quick.  Good thing I was packin some beef jerky.
3.  Wriz’ beard.  Have you seen this thing?  Squirrels wouldn’t nest in that entanglement.
2.  Sitting 4 rows from the top of CB Park while Wriz (and a gang of pigeons eating popcorn out of his beard sat at sea level).  I’m a former BOTY…how quickly we forget! 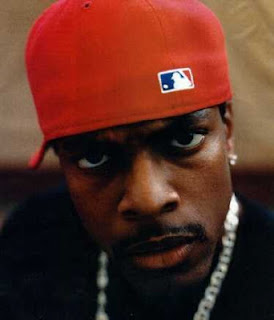 THE WRIZ WITHOUT HIS BEARD!


1.  DB29 prancing around in his ‘Bunts shirt when he hasn’t written a blog in over a year.  The only thing worse than that was another absence by DiamondGirl.  Netfather Bill could fly half way across the country, but she can’t drive across state?  Really?

At least there wasn’t any oily sausage this year…let’s get ‘bunted!
Posted by Jay Wrizight at 1:31 PM 8 comments: