View from the Left Coast by a Lefty: Chooch

View from the Left Coast by a Lefty:  Chooch

I don't know why I never did a piece on any of the other Phillies who left. Rollins and Utley came back, and got their deserved due. The all time hits leader and The Man. The fans got their chance to show the love, and show it they did. You will never hear walkup music for another non-Phillie, *EVER*. That song is my ringtone and every time my cell rings I think of Utley. Halladay and Lee were loved, but left injured. They were loved, but not to quite the same degree. I also hope Hamels comes back home to play before he retires as I don't think we'll play the AL West anytime soon. And I truly hope they give Howard the same respect in his last home game.

But this is about Chooch... where to start. An $8,000 pickup from the sandlots of Panama, when he came up nobody expected it to last very long. A true underdog who personified Philly, he worked his ass off to be an elite catcher. He didn't have to work at all to become one of the most loved and respected teammates as that came naturally. His kindness, class, and humility were always evident. The fans loved him from Day 1. He was the backbone of the pitching staff, working tirelessly to gain each pitcher's trust and pitch preferences. He called them HIS pitchers and took ownership of expectations and got results. He caught over 1,000 games for the Phillies joining Clay Dalrymple, Bob Boone, and Mike Lieberthal for that honor. In 08 and 09, World Series years, he caught every pitch of the playoffs and turned into one of the best and most clutch 8 hole hitters I've ever seen. No other 8 hole guy has ever influenced an offense as much.

They say the key to defense is be strong up the middle. In 80 it was Boone, Bowa, Cash, and Maddox. In 08 it was Chooch, Rollins, Utley, and Victorino. Nuff said.

I moved back to Phoenix in March of 02 after 5.5 years in Dallas. Every season I went to at least one game when the Phillies came to town. at behind their dugout, usually 20-30 back. Sat with all the other Philly fans. Have yet to go to a game like that and see them lose since 02 as well. In all those years one thing never changed... whenever Ruiz came to the plate, or got a hit or drove in a run, the faithful all rose together and yelled CHOOOOOOOOOOCH as loud and as long as they could. I don't remember any other player being called by name. 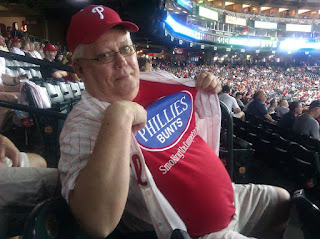 There are certain people in everyone's life who directly or indirectly become unforgettable, and Chooch is one of them for me. To close I'm stealing a few lines from Inquirer columnist David Murphy:  "What is his legacy? You know that old piece of clothing, with that long ago smell? Maybe that is Ruiz: comfortable, familiar, enduring, a vehicle for our memories."