State of the Union?

View from the Left Coast by a Lefty: State of the Union? 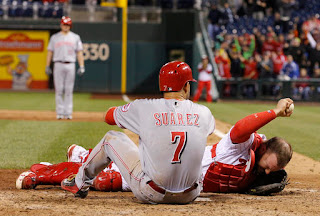 No doubt about it Phillies this year are at least interesting to watch every day. Per the all star break they have the biggest improvement over last year in baseball. Bodes well for the rebuild, but it seems to me people are expecting more. The same old voices cringe when it's suggested that Rupp become a trade chip. Why not? I don't think any teams will be interested in Chooch and Rupp is on the rise. He's still young(27) and under control for another year. His only shortcoming is he's average at best throwing runners out on the bases. But if he goes to a contender they'll surely have better pitching which leads to less runners to throw out. He's a pro and that's hard to find these days.
Rather than post pros and cons I'm just going to kind of go through the roster with my own personal suggestions. If ya don't like what I print say so, don't be a wuss.
Pitchers:
Eflin, Eickhoff, Nola, and Velasquez - Status quo, could be better but could be worse. Nola will come out of his funk, he has to.
Hellickson - there's interest in him, I say trade him and add to the minor's stable. He and Rupp are there best shots at prospects. I personally want to see Thompson.
D Hernandez - take whatever you can get for him, too inconsistent.
Neris, Ramos, Gomez - keepers, will only get better.
Stumpf, Obertholtzer - meh, but they're lefties which don't grow on trees. Araujo should be a stud but fails, cya.
Asher, Murray, Buchanon, Gonzales, and Cordero - meh, career minor leaguers. Toss in Garcia too.
on the DL: Appel and Harrison, jury still out on both. Morton could still be a force but they should shitcan Hinojosa.
Catchers:
Chooch - great but overpaid backup, best of luck to him after this year. He can go back to his ranch and enjoy his life and be welcomed in Philly any time he comes back.
Rupp - solid starting catcher now but only a placeholder for...
Knapp - should be the solid backup soon
Alfaro - the next coming of Pudge Rodriguez, I can't wait to see him.
Infielders:
Franco, Galvis, Hernandez, and Joseph - the core infield in years to come. Galvis will replace Blanco as great utility guy when Crawford comes up.
Blanco - possibly the best utility infielder in the NL. Love to see him get more starts but it's up to Pete.
Howard - a top 10 all time Phillie, enjoy retirement you earned it mostly except for the last couple years. He'll hide out in FL in his mansion.
Crawford - *THE* future at SS and the top prospect in all of baseball. Cannot wait to see him and Alfaro every day.
Outfielders:
Odubey - great selection in Rule 5, but also the biggest enigma on the team
Bourjos - if he can hit over .270 a keeper. Already flamed out bad with 2 other teams.
Asche - decent backup outfielder when Altherr comes up, who needs a big looksee when he does.
Goeddel - had a hot streak but since not much. Speed yes but jury still out on this year's Rule 5 guy.
Paredes - worthless, cya.
Sweeney - probable career minor leaguer.
Williams and Quinn and Cozens - yes please let's see a lot more.
If I left anybody out of any value hey, this is all IMHO and I prolly don't give a shit lol. If any of you have opinions that's what the comment box below is for. But we all know nobody ever uses it so.................. let's get Bunted!!
Yes CJ I want one of those blue shirts please.  :) 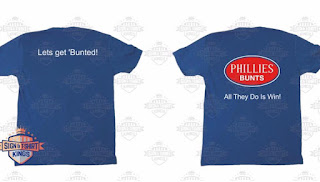