WHO ARE THESE GUYS 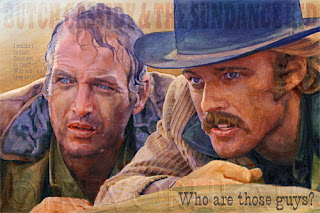 Whoever they are, break'em up quick. No seriously, who are these guys who are sporting red pinstripes who were almost 40 games under .500 the first half? The answer apparently is pretty much the same guys who sucked major azz before the break. I admit, I am stunned and am not sure who to point fingers at and why. At the same time I'm almost afraid to drink the koolaid and hope that better time are on the way. Yet, here we are and NOT in the cellar.  :D
What is this phenomena that we are witnessing? One thing I know is there is now chemistry on this team. Each and every one of them has confidence, and loves the game and their teammates. It's the same type of chemistry our division title teams had. They may not have the talent those teams had(yet), but they don't lack for anything else including effort. A few things stand out to me:
1) Hernandez is here to stay, and after 2 years  is finally living up to his former hype.
2) Odubey is the real deal. His confidence grows daily. When he actually learns to play outfield watch out.
3) Franco has arrived. He's still a little anxious at times but aggressive is better than thinking too much.
4) Frenchy was a great add on. He just produces period.
5) Howard is getting caught up in the enthusiasm and playing much better.
6) Rupp keeps amazing me. Not just a placeholder anymore for Alfaro but a real MLB catcher.
7) Galvis is still outplaying expectations made of him before the season.
8) Brown is having another month of good baseball. Will it last or fade again? 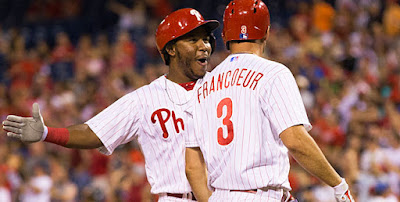 The pitching still astounds me, at least starting. The bullpen is great. We'll miss Papelbum(not me) but 100 Mile Giles is the shiznitz. Utley and Chooch have settled into secondary roles and I think that's part of the glue keeping this team as it is. The best part... help is on the way! Alfaro could easily become a bigger, better Pudge Rodriguez. Nick Williams is ENFUEGO, and a big hard hitting RH corner outfielder is just what the Dr ordered. The Fightin Phils have charged into the playoff picture and the whole farm looks energized. *WHO ARE THESE GUYS?*
I really almost didn't want this to happen, because common sense says it can't last. But being a Phillies fan since 1958 is making me hope it's not an internet glitch or something. Honestly, I don't know what to think other than they will be here tonight in a few hours and I need to find a good bullshit excuse to miss work Wed for the lunchtime getaway game. Until then....
Bill S aka/netfather