View From the Left Coast by a Lefty:  Done and Done

View From the Left Coast by a Lefty:  Done and Done

I know to many this season can't possibly be over yet. But guess what, it's been six months already and the Eagles are on the verge of a really good month which wasn't really expected. To even more(like me) it's only 4 days until the NHL season begins(go Flyers mofos). Since the beginning of the season so much shit has changed I don't know if it's possible to even cover it in one sitting but I'll try like hell.

Thankfully this season the front office finally embraced the term rebuild. For my mind it took them way too long to start bringing up the kids, but bring them up they did. And also finally they realized Pete was not the answer at manager. Better late than never as the saying goes. So now, Mr. Klentak, the pressure is all squarely directly on you. The second half of this season shows that with a bit of tweaking next year can be *VERY* interesting.

I'll start with manager... go wild with possibilities but to my mind Dusty Wathan at age 44 could be perfect. NO Wriz, he is not Sandberg reincarnated. He has proved he can win with kids at AA and AAA, especially this year. That the Pigs made the playoffs losing their best 6 players is a tribute, besides the fact he is the all time leader in wins in Fighten Phils history. Then go to the coaching staff. If the Phillies don't keep Bowa I may have to root for the Dbacks permanently. McClure is so so, along with Samuel and Morandini. Matt Stairs is the best hitting coach in a long stretch. You can tell he cares. Since the bullpen has come along I'm on board with Rick Kranitz. I think this year is Chooch's last as a player and can't imagine anyone better to make Alfaro into a top tier catcher. If there is any way possible they need to add Utley as a coach somehow, some way next year too.

And now the fun begins... what will the roster be like? Say buh-bye to Kim, Nava, Fien, Perkins,

Blanco and Stassi and probably more. As much as I like Ty Kelly as a person he basically sucks too. Piece by piece we can go this way:

Starters: Nola
2-5 : wide open. What do you think of the Henderson Alvarez project? To me it's intriguing. Rest of the kids play out in spring training.

Pen: big improvement over the season. Love Morgan and Milner. Garcia and Neris need to quit jerking the ball to the LH batter's box. Neris needs to relax.

Catcher: Alfaro is the man, especially if Chooch can make him a real back stop and cure his laziness behind the plate. Gimme Knapp as backup. Will miss Rupp the man and dugout leader. I still love him but this is no time to look back.

Outfield: Altherr, O'Double, and Williams left to right. No need for a FA bat, save the $$$$ for pitching. Bench can be mix and match.

Infield: here is where the fun really is and the shit will fly. I make no bones, I love Galvis. If he doesn't win a gold glove this year a hit needs to be taken out on the voters. That being said he and Hernandez should be given a chance to play 1000 games together like Rollins and Utley.. Hernandez is the best leadoff hitter they've had in years. That being said I'm considering what several people have said during this last month of the season. I am not giving up on Franco. If someone, *ANYONE*, can get through to him to adapt like Adrian Beltre did he'll be the third baseman for years. Don't forget he's only 24. As Schmidt said when he was 24 he was just beginning to figure things out. Then going into the corners... 1B is Hoskins nuff said. 3B dayam... Crawford has shown he's every bit as good at third.. That brings a whole new argument. He's only 22 and for my money can hit better than Franco except for power.

X-factors: here we go. Crawford could open at SS next year, with Kingery at 2B. Kingery is ready for the big time. 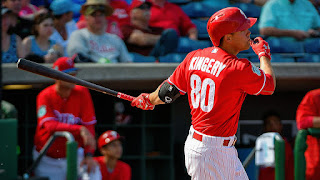 Trade pieces: this is the whole ball of wax. Phillies could be looking at trading Joseph, Crawford, Galvis, Hernandez, Kingery, Franco, Rupp, Knapp, and who knows what else. Remember this is entirely my opinion even though it is a shitload better than most of the Phillies' writers. For that matter if they had listened to me 4 years ago Howard might still be a force. Yeah well, I'm a legend in my own mind anyway.