View from the Left Coast by a Lefty - On the Fence

This is kinda early for me but since CJ has posted already what the hell. 2 games into spring training, seriously, what can you tell? Well it seems to me several small things pop up. First, I haven't decided yet on the offseason. Some good small moves, possibly dictated by the cap. We've become accustomed to big headline splashes and the wallet finally can't keep up. I must say though, WHY THE FUCK sign Delmon Young, no matter how "cheap", without giving Babe Ruf(who tore up winter ball) and Dom Brown a real fair shake? I like Revere a lot, but Chollie better swallow his pride and let him lead off. Revere has said and done all the right things since he signed. But wait til he plays at The Bank and see what REAL fans are like. If he likes the organization now, wait til the home opener. And will someone please tell him yes, the Flyers do have a black dude playing for them lol... arguably one of their top players to this point. ;)
I *LOVE* signing Mike Adams. Scratch off 8th inning setup man. That leaves Stutes and Bastardo to early situational work that they're suited for. Kudos to Bastardo for changing to his 3rd different number in as many seasons lol. I really hope Aumont is ready for some long relief, at 6'8" he should be strong enough for it. I also have hope that Dubee gets out of his fucking recliner and really pays attention to what's going on this year, and not flying by remote control like Chollie seemed to be doing too often last year. 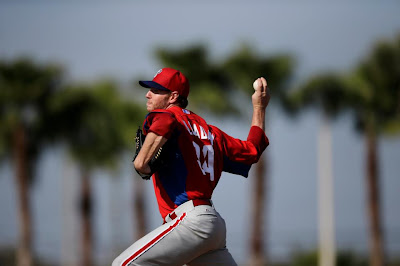 Quick notes on Cole and Doc... neither seem to have any lingering effects of their shoulder ailments after their first starts, albeit 2 innings each. Both strong with command. Cliff, your turn today.
I agree with Doc, Cole is # 1. I just hope he embraces it as well as he did his pay check. Both had rock solid starts over the weekend. I don't agree with Doc that we need as many wins as possible in spring training to carry over to the regular season. Spring training is as much for Chollie as it is for the players. He hasn't pushed buttons as well as he did 5 years ago when the talent overrode anything he fuct up. We cannot afford that in any way, shape, or form.
Now to the meat and potatoes. Around the horn.... Michael Young is a quality guy and player. Both the Phils and he need him to return to all star form. I think he proves to the Rangers they should have kept him. I also loved how he told Eskin he was a dick for putting him on the spot in his first interview.... quote "You suck" :) He is a young 36 if there is such a term. JRoll... other than his batting average was solid last year . I believe he knows in his heart he *NEEDS* to lead by example this year. I'll reserve final judgment on him until I see him play in the WBC on 3/8 and the rest of spring training. My tix are just past the 1B dugout first row, and I won't hesitate to let him hear how I feel on anything he or Shane does lol. Now the biggest part of the situation, right side of the majors oldest infield. Chase... looks great, sounds great, rbi in his first AB. If his legs are ok, can we trust Chollie to use him right? I fugging hope so. And The Big Piece... so far so good. His
Achilles should finally be healed and if I were the batting coach I'd close up his stance some more and ... oh wait, you're tired of me saying how I could make him hit again, right? I won't let that go, I know hitting. Let me add in Yuneisky Betancourt, Galvis, and Frandsen are solid infield backups, so to move on...
Chooch, I hope you got caught recovering as opposed to supplementing. Thank God for Kratzy who can hold the fort for 25+ games. Also, I need to mention Cody Asche who should make a perm appearance sometime by the end of June.
There you have it from the desert. A lot left unsaid, but spring training just started. There is also something else not right. I haven't heard the sound of catcher's mitts popping the last couple days when I go out to my car. I guess the Giants aren't spending much time across the street like they have in the past. I mostly don't care except I want Hunter Pence to sign my #3 jersey so I can frame it lol. Oh well, my problem. Cya at the end of spring training when we can debate what happens in the next 4 weeks.
Bill S/aka netfather
Posted by Jay Wrizight at 1:39 PM 1 comment: 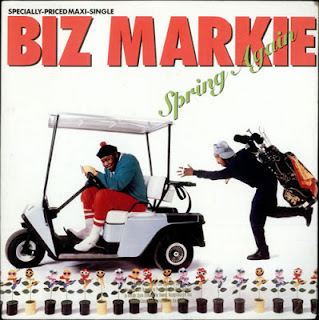 THIS IS THE TIME FOR FALLING IN LOVE!
The 2013 Phillies open up Spring Training this week with more questions than answers. Will Halladay return to form? Who is starting at the corners in the OF? Will Kornhole write more than 1 blog for the ‘Bunts? These and other questions plaguing the Phightans this season could all be addressed with the same answer: Time will tell. Our preseason ranking is 16, with the Gnats being #1 and the Braves coming in at #2. Needless to say, the NL East is going to be as competitive as a ‘bobbing for roids’ contest between ARod & Ryan Braun.
So let’s break the ’13 Phils on down like an old schoolbreakdance sesh. So grab some linoleum and put on your Keds: Let’s kick it!
New Edition: Ronnie, Bobby, Ricky, Mike, Ralph & Johnny to…
Mike Adams – The best acquisition of the off season. No more throwing-up Dollar Dogs during the 8th while some scrub blows our 1 run lead. Grade: A

Delmon Young –Fat, anti-Semitic and hurt? Where do I sign?D*Yizzy makes Blanton look like Slim Whitman. Word to UnaPaloma Blanca! Moreover, you won’t catch Young at the Seder table anytime soon. Philly hasn’t seen this much of a train wreck since Kornhole was cut off at the Walnut Street Starbucks! Irregardless (not a real word), this acquisition should provide more drama than a Real Housewives ep. I’ll be watching! Grade: B (Got him for cheap.)

Ben Revere – Michael Bourn Jr? Really? He’s fast, but can’t throw or hit. RAJ says he’s a ‘work in progress’, but so isknitting an afghan. He’s starting…so there’s no looking back now! Grade: C
Michael Young – In baseball years, Michael is everything but young. He might as well have done the Charleston at the Speakeasy with Netfather Bill. Nevertheless, I back this acquisition and feel that Young has a lot to prove since getting bumped by the Rangers. I feel that he has the skill and drive to make his old team regret giving him the ole hucklebuck! Grade: B+
John Lannan – We used to smoke Lannan when he was a Gnat and now we have him. WTF? Grade: C-
Not Ready for Prime Time Players: Live from Philly, it’s …
John Mayberry and/or Dominick Brown – IMO they are one in the same. The experiment has failed. Demote them, trade them or cut them…I don’t care.
Kevin Frandsen – I am a Frandsen fan. His D’s not the best, but his bat came through for us more than once last season. He’s a good bench player to have. Plus he gets the flame in Robin’s old coal stove burning again.
Darin Ruf – We gave Mayberry & Brown more chances than the Prodigal Son. It’s time to give Ruf his due. Start him at left and Brown at right til/if Young’s ready to roll!
Phab 5: I gotta ticket to CB Park and I don’t care…
Ole King Cole (Hamels) – Will he start Opening Day or not? Stop that ish!!! He’s your Opening Day pitcher…you paid him remember?!?!?! Cole #1…Iran *hak put*!
Cliff Lee – If your Fantasy League awards points for ‘quality starts’ then Cliff Lee’s your mellow! If he gets any run support this season he might beat Hamels in wins. Plus our 2 left-handers need to be split up. He’s your #2!
Doc Halladay – He’s not your parent’s pitcher anymore. Granted he’s better than most out there, but he’s getting old. I hope he returns to form, but it’s highly unlikely. I got Doc at #3.
Kyle Kendrick – Phillies fans love him and hate him and that’s all in the same inning. Kendrick was last year’s MVP. He was more reliable than the 2nd pair of undies your mom packed! I’m counting on him to have a great season this year.
John Lannan – see New Edition.
OG’s: Posse up!
Ryan Howard – Howard’s been on a steady decline since winning the World Series. Pitchers have figured him out and could afford to pitch around him if need be. Fans who think he’s going to return to his glory days are the same people who think wrestling is real. Howard will have an average season at best.
Chase Utley – Ladies love him, girls adore him…I mean even the ones that never saw him. But, his knees are about as reliable as Fox News. Utley’s Spring Training is going better than last year’s ie he’s not playing 2nd from a chair. So, is he healed? Ah, no. If Chase plays 100 games this year I’ll be happy. Galvis is back (get it? Back!), so the D shouldn’t be an issue, but the bat will…both Chase’s & Freddy’s. If Chase is on point that’ll make pitching around Howard more difficult. But again, when it comes to Utley, there are more questions than answers.
Jimmy Rollins – J*Rolled into camp early this year (because he’s playing in the World Classic). Still it’s nice to see him. Last year, was a typical Rollins year, where his D was stellar, but he still remained the King of Pop. I think if Revere gets hot,Cholly needs to replace J*Roll at lead off.
Carlos Ruiz aka Chooch bka Speedy Gonzales – Chooch is the man!!! But, is that because he was more doped up than a hippieselling PB&J’s in the parking lot of a Grateful Dead tribute bandshow??? Well??? The 25 game suspension hurts, but Kratz got this. I just hope that Chooch was/is the real deal. We’ll see…
Well this is my review…love it or leave it alone. I’ll be back in a week or so with my season predictions. Leave some comments below and share this noise with your friends onSpacebook! Until next time…let’s get ‘bunted
Posted by Jay Wrizight at 6:24 PM 1 comment: