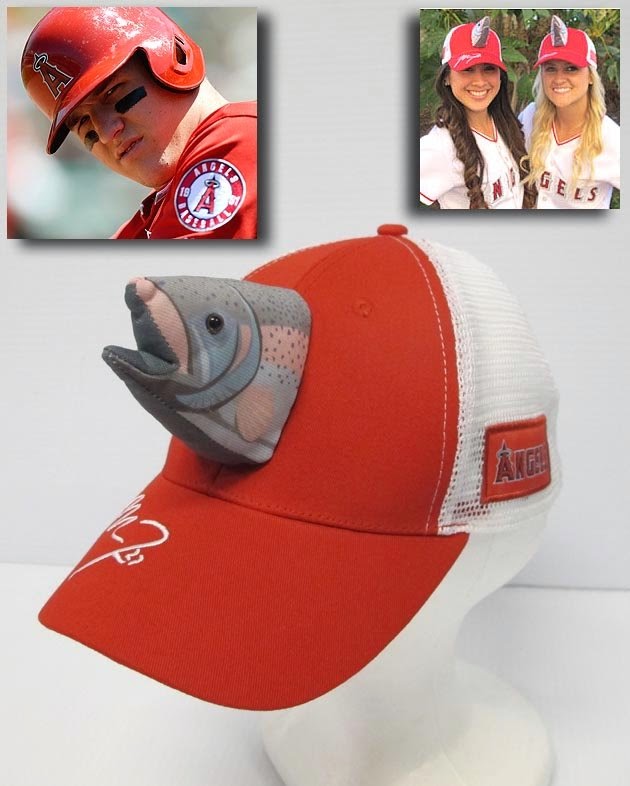 As if I needed a reminder on how far the Phillies have fallen since their glorious run from ’07 to ’11, I realized I was looking forward to yesterday’s game more so than any other game I’ve attended the past year and a half and it had nothing to do with the Phillies whatsoever. 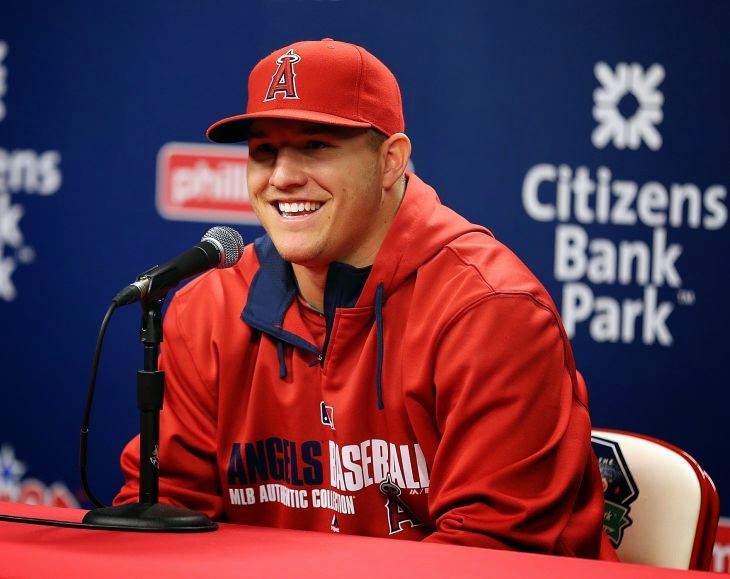 For the first time since bursting on the MLB scene Mike Trout was “coming home.” It’s not like I was one of the legions in attendance rocking an Angels cap or a Trout shirsey. I just wanted to see him play. Live and in person. I’m sure even if you had no idea who he was a week ago you know now. Trout grew up in And in his only 2 full ML seasons finished second in the AL MVP voting twice. He finished behind a guy who won the Triple Crown and still managed 5 first place votes. He’s the one that’s making people say “Bryce Who?”  The fact he’s local really had only a small influence. Simple said, Trout is the games present and future.


My only fear heading down was that Trout would be given the day off after the night game on Tues, you know, because that’s my luck. I went to see Ken Griffey Jr when he first came to the Reds. The Phillies sucked ass that year (finished with 65 wins) but managed to throw up a 6 spot in the first and before you knew it, it was 9-0 and Griffey was out of the game in the 4th inning. But as I headed towards the gate with former Bunts staffer DB29,  I could hear Dan Baker announcing he starting lineup and Trout was playing. He has a pretty mediocre series 2-9 but did have a triple that I got to witness his speed rounding the bases. I thought for a second he might test noodle arm but no dice. But it still beat watching Ryan Howard have one of the worst AB’s I’ve ever seen in my life. He swung and missed for strike 2 and wasn’t even within a foot of the ball. He shoulda saved face and taken strike 3 but decided it be better it miss that one by a foot and a half.


I can now add Trout to the list of the many great players I’ve seen over the years and I can go back to begrudgingly going to the Phillies games just for the love of the game not because I’m expecting a win.


See ya at the ballpark!

View From the Left Coast by a Lefty: Disappointed 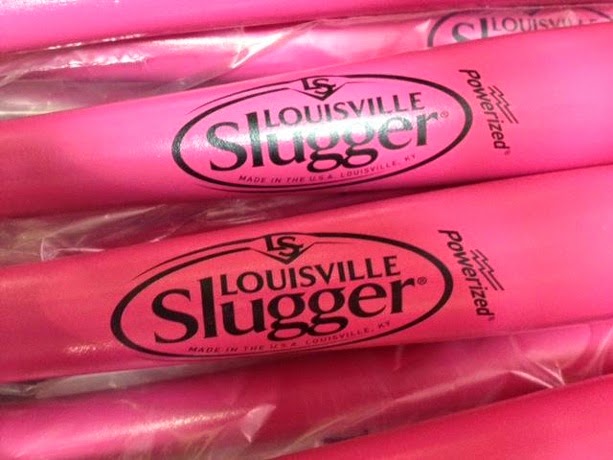 Through Sunday, 5/11, Mother's Day, I pretty much still don't know how to take this team. Physically, everyone seems to be ok. I am duly impressed with Rollins and Utley and have no issue with the play of either. While Howard also seems healthy I AM disappointed in his play a bit. The best way to describe him is inconsistent. Maybe that gets you Howard freaks off my ass, but I expect more. I know he's capable of MUCH more... if only the Phillies had a batting coach who was worth a shit. Yes, his hustle yesterday was noteworthy, but that eyelash play at first with E Young Jr could have been averted with 1) Asche not crow hopping and 2) Howard giving a full stretch. The man makes $25Mil/year, he is fair game and I don't care what happened last year. There are too many days in between "good games" and I don't mean 4 hits etc. In 34 games he is hitting .256 with 7HR and 21 rbi. Hardly MVP or $25MIL numbers either. Doesn't even equate to 100rbi/yr.
That's not all. As stated Utley(.333, way down from .486) and Rollins .274 no issues, performing as well as could be asked to. Same for Chooch at .279. Cody Asche is coming back from the dead, back up to .240 from just over .100 a month ago. Marlon Byrd has been steady all year between .275 and .300, thank god for him. Brown is back to pre 2013 numbers at .234 with 1 HR. Plus,

he is an average fielder with an average arm. I love Revere to death, but there is no defensive position for a spaghetti arm outfielder unless he hits .450 with 70 steals a year. All of this backs up their record at 17-19. Color me disappointed.

Gwynn is showing why he didn't play least year. Nix... meh nuff said. Mayberry .143, SMH. At least Nieves is earning his keep. I see nothing to make me excited for warm weather. Even given Howard's history of a slow start, nothing points to a possible 10 game winning streak anywhere in the lineup. I see .500 wherever I look realistically, although the talent level should dictate more and recently there have been signs of progress.
Lest we forget pitching.... Cliff has mostly been an ace. Burnett, even with his physical status, has exceeded expectations. Cole has shown signs of possibly being a top of the rotation guy lately, even though he mostly hasn't done shit since he hit the lottery excluding today's game. Kendrick has teased us with both good and bad, just like 2 years ago. Fausto has surprised me, even being up and down. And herein lies the problem... bullpen. Ryno has very few guys he can trust. Adams is a bust, Diekman can't throw strikes. Bastardo same, and when he does he sometimes get lit up. And those are the best. Papelbum gets a pass after coming back strong from his first outing. The rest of the pen is "who dat" and bleh.
I so wanted this piece to be positive after my last one. Certain points in the last week or two had me hopeful. Now I can best describe the season as disappointed, and not looking like anything better than last year. I'm getting too old to be looking at what I see and not being happy. If history holds my kids will be my age before we win another World Series unless big changes are made. Who's going to make them is the biggest question, and one I cannot answer.
Bill S aka/netfather
Posted by Jay Wrizight at 4:43 PM No comments:


Terror in Toronto
I haven’t been watching a lot of baseball the past few weeks.  This is a busy time of year in Casa Hood, my kids play softball & baseball and I of course coach.  (Note: I’m the only Bunts staff member who’s coached against a former Phillie).  Anywho….I didn’t see much of the left coast run…I gotta job bro!  However, I did see the Mets game when Cole got shellacked, then there was the rainout and a day off.  So it wasn’t until the ‘Gnats rolled in last Friday that I got to see the Phightans play for the first time in weeks.  So, where we be?
As I write this, the Marlins are leading the division in the NL Least. Our division is like Kelly Taylor, everybody gets their chance on top…except for the Phils of course.  Our team has been hovering around .500 and last place all season.  I predicted the Phillies would make the 2nd Wild Card team and I still think that’s possible.  However, certain things have to change.


Insert Funny Photo Here
INSERT FUNNY QUIP HERE
Howard – You went from an F to a D+.  It’s like a 300lb guy standing to a 500lb guy…you’re still a hot mess.
Utley -  I love you more than the Real Housewives of Media…please don’t let up!
Rollins – Rollins scores; team wins! Get on it bro!
Asche/Nix – You guys are one in the same like Joe Derita & Curly Joe…don’t matter; y’all stooges.!
Dom Brown – You might not be getting All Star numbers like last year, but you’re on your way!
Revere – You seem like a nice guy.
Byrd – ‘DA MAN! Sneeze on the team and spread that ish around!
Chooch – the toilet of this team. No flash, no big check….just workin hard to get rid of this shit.
What about the pitching staff?  Well Cole’s been on the decline since becoming a trillionaire.  He’s got his ring, MVP & paycheck.  Where’s his motivation?  The fans that are saying ‘he’ll be fine’ are the same type of people who stayed on the Titanic with a mop and a roll of Bounty.
We’re all familiar with the pic of Cliff Lee all pissed off at last year’s All Star game in Citifield.  For some reason I think he feels that away a lot with this team.  Except for ‘pitching BP in Toronto’ (Wriz), it’s been another stellar season for Clifford.  However, his stats don’t reflect this cuz a Dollar Store bra offers more support.
I dropped AJ Burnett in Fantasy after he got smoked in Chicago and was diagnosed with a hernia.  Like Weird Al crooned he’s ‘Living with a Hernia’ and is doing great.  Groundball biz!
KK is like hiring a teenager to wash your car…he might do a really good job or you might end up with ‘POOP’ keyed on the driver’s side door.
Roberto Hernandez…I like you.  Not like how the Wriz likes to put the free pantyhose on this hands at the shoe store and ‘do puppets.’ But, like how you handle your biz!  Keep on keepin bro!
And the bullpen…it’s a pigpen.  ‘Nuff said! #bringupGiles
Irregardless (not a real word) of this spot on assessment, it’s the same ole same ole.  If it’s not the offense, it’s the pitching.  If it’s not the pitching, it’s the bullpen. And if it’s not any of that jazz then it’s Galvis!  Our 4th Annual Meet & Greet is a month away…let’s get ‘bunted!
Posted by Jay Wrizight at 4:02 PM No comments: